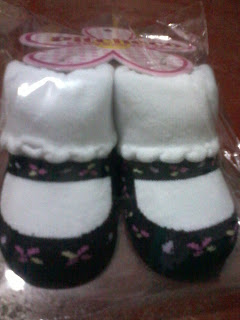 We're going to have another baby in the family, and the little bead's a girl!!!

I can't wait to see little Julianna. I've been pep-talking her momma into breastfeeding and I'm already preparing to stock up on my own milk in case she'd have a hard time producing milk initially (just like me). Hehe. Excited much! She'll be due in a couple of weeks, God willing, and we're all praying for a safe and quick delivery. :)
- - - - - -
A couple of weeks ago while watching tv after dinner, I suddenly thought of Yohann's future little sister. I've been thinking a lot about when we're going to be ready for another munchkin and I definitely am praying for a girl. I told the hubs that I kinda like the name Yvanne (Eee-vann) for her, and would he please look up the name's meaning in the net. He did, and we found out that it's derived from Yvanna which means 'God is gracious' in Hebrew. Me likey! Anyway, he read up some more names beginning with Y and when he said 'Yelena (Yee-lay-na)' I had a eureka moment. Lol. I like it too! I know it means 'light', 'bright one' or 'shining one.' Now, since we have this thing for initials being uniform -- daddy's initials are RYL so Yohann's first name is Raphael -- I told the hubby to think of a first name beginning with R that would go well with Yelena. He scrolled through the R-names for baby girls but nothing sounded quite right. We eventually got distracted from our name-finding and returned to watching tv.
Several minutes later, hubby went to the toilet for a few minutes and, upon coming out, had this silly smile on his face. He was almost laughing and I knew he'd been thinking of an R-name while doing his thing. He proudly announced, "I have the perfect R-name that will match Yelena!" I asked, "What?" And he replied, "Reina. Reina Yelena!"
Wahahahahahaha!!!
Posted by Mei at 11:30 PM